In July 2020, the Andhra Pradesh government announced a scheme for free borewells for eligible small and marginal farmers. The ambition to “irrigate every acre of arable land in the State” is part of the ruling party’s promises under its flagship Navaratnalu welfare scheme.

While it is ecologically unsustainable for irrigation to become the default for all agricultural land, this has to square with the principle of providing access to reliable water networks to all farmers, especially small farmers at the mercy of erratic monsoons. But the means adopted to achieve this in Andhra — free borewells — has been much criticized for its effect on groundwater levels and cropping patterns. Despite the aim of increasing access to water for all farmers, what it will do is democratise the groundwater crisis.

By subsidising borewells for millions of farmers, Andhra is under the threat of going the way of Telangana in its groundwater situation. Previous government schemes to subsidize borewells in the undivided Andhra Pradesh state, such as Indira Jalaprabha and NTR Jala Siri, ended up depleting groundwater levels.

Begun in 1969 to supplement then inadequate irrigation networks, borewell digging has never been discouraged in Andhra Pradesh. It is a zero-sum game among farmers as each sinks money in trying to drill deeper and deeper as the water table declines. Over the decades, this led to a cycle of lucrative water-intensive crops, debt traps, deaths by suicide, and out-migrations of lakhs of families.

The borewell policy potentially sparks a new political economy of crop-sowing through bad incentives, which would be difficult to undo due to lobbying and political one-upmanship.

Till now, borewells were mostly dug by bigger farmers. The new scheme will cover more than 88% of Andhra farmers. (As per the Agriculture Census 2015-16, AP has 85.24 lakh operational holdings totalling 1.98 crore acres. Of these, 75.5 lakh holdings belong to marginal (up to 2.5 acres) and small farmers (2.5-5 acres) holding 1.15 crore acres.) The current scheme has attracted over 2 lakh applications, in line with official targets. The small and dispersed nature of plots held by the farmers meant that implementing the scheme would violate the AP Water, Land and Tree Act, 2002, which prescribes a set distance between borewells and limits their depth. (Consequently, the scheme rules were amended to ensure that only one borewell would be dug per 1 hectare. Since more than half the applicants have much smaller plots, they have been asked to re-apply with others in groups with contiguous landholdings.)

The borewell policy potentially sparks a new political economy of crop-sowing through bad incentives, which would be difficult to undo due to lobbying and political one-upmanship. When states offer free resources, such as free power for 9 hours and free borewells for small and marginal farmers, it tends to alter the incentives in unforeseen ways. If borewells fail or perform only marginally well, small and marginal farmers might well be tempted to sink another state-sanctioned borewell.

Contrast this to the initial scepticism of a small Rayalaseema farmer towards having a borewell at all. With the ability to have 1-2 borewells in his field at the state’s expense, his decisions regarding what crops to sow might change drastically, resulting in water-intensive crops that might not be suited to the landscape.

Between May 2016 and May 2020, as evident from the graph below, groundwater levels in Andhra Pradesh showed wide variation. Possibly due to deficient monsoons, agriculture ended up depending increasingly on groundwater resources. By May 2019, Andhra as a whole showed a decline of 39% in its groundwater levels. Currently, these are back to 2016 levels and have been stable over the past year. With floods, heavy rains, and cyclones since August 2020, groundwater levels showed remarkable improvement into December.

In line with the national average, more than 80% of groundwater in Andhra is used for irrigation purposes with the rest utilized for domestic and industrial use. As of 2018-19, nearly 44% of crop-irrigation in Andhra Pradesh was dependent on groundwater sources. This is in contrast to the all-India average of 65%.

With the new borewell scheme, coastal Andhra could see a rise in groundwater-based irrigation. As a warning, Andhra needs to look no further than its neighbours Telangana or Tamil Nadu.

But there are regional variations within the state.

As per the Season and Crop Report 2018-19, the dry Rayalaseema region is overwhelmingly and unsustainably dependent on groundwater as a source of irrigation. Villages in the region’s Anantapur, Chittoor and Kadapa districts (along with those in coastal Andhra’s Prakasam) figure prominently in the list of villages that have overexploited groundwater. In Anantapur district, 89% of the farms are dependent on groundwater for irrigation, 95% in Chittoor, and 88% in Kadapa. In comparison, the average in coastal Andhra districts is 35%. With the new borewell scheme, coastal Andhra could see a rise in groundwater-based irrigation.

Sowing water-intensive crops is often tied up with factors that are mostly unrelated to environmental suitability (and even profit-making).

Water-intensive crops like wheat, rice and sugarcane have been the staple in Maharashtra and Punjab despite being ill-suited to the semi-arid landscapes of such states. But these crops give higher returns and are backed by minimum support prices (MSPs). State governments further subsidise these crops by offering free electricity, free water, huge fertilizer subsidies, and massive loan waivers. Thus, sowing water-intensive crops is often tied up with factors that are mostly unrelated to environmental suitability (and even profit-making) when the state underwrites both inputs and outputs.

While dry crops are more suited to local conditions and have lower input costs, the returns on them are low as well. Once the state incentivises planting water-intensive crops by subsidising some inputs, farmers will be encouraged to spend higher on input costs such as high-yielding variety seeds, labour, and fertilisers. Even her profit margins are bigger in comparison to returns from dry crops. This locks the farmer into a cycle of high and recurring input costs for higher returns, state subsidies, and continuously depleting groundwater levels.

How do we support farmers who genuinely need the water to give them the freedom to pursue their cropping dreams?

Small and marginal farmers in Andhra already spend excessively on borewells and pesticides. More than half of the state’s marginal farmers and about a quarter of its small farmers are indebted. Overall, 92.9% of Andhra Pradesh’s agricultural households have been pushed into debt— the highest proportion nationally.

The aspiration to free oneself from the shackles of local conditions has been the driving force behind rampant drilling of borewells. But these attempts have remained largely unsuccessful in supporting water-intensive crops in Andhra’s rainfed districts. How do we support farmers who genuinely need the water to give them the freedom to pursue their cropping dreams?

A government does this by focusing on building dams, canals, and irrigation networks that ensure farmers do not have to depend on rains or unsustainable drilling for groundwater. Inputs for crop-sowing must be made accessible and affordable: high-performing seeds, functioning crop insurance programs, linking farmers with tech-enabled knowledge networks to give them timely info on every area of agriculture, and setting up local learning and implementation centres to overcome last-mile delivery gaps.

On the ground, there have been several approaches to tackle the problem of water in Andhra’s drought-prone districts. One was the digging of ponds and rain harvesting programs with a convergence of MGNREGS funds and District Water Management Agencies. Anantapur topped India by digging more than one lakh ponds to increase groundwater level. Currently, Rayalaseema and Prakasam districts account for more than 70% of AP’s farm ponds, check dams, and percolation tanks.

Another approach was through the on-going AP Drought Mitigation Project (APDMP), partly funded by the International Fund for Agricultural Development since 2017. It aimed to build drought resilience, participatory groundwater governance, diversifying livelihoods, and assisting farmers shifting to “less water-intensive and more diversified and profitable cropping systems” in Rayalaseema and Prakasam. A mid-term review of this programme in 2019 outlined its marginal success in raising agricultural productivity. It was overall rated moderately unsatisfactory in implementing core objectives.

[A] shift to pulses happened over the years both due to consumer demand and suitability of cultivation to the local conditions in Rayalaseema and coastal Andhra.

Another approach has been the expansion of cropped areas under oilseeds, pulses, maize and palm oil to diversify and achieve self-reliance. Since 2014, Andhra has been a significant driver of India’s Integrated Scheme of Oilseeds, Pulses, Oil Palm and Maize. Nationally, it accounted for 43% of the area expansion under these crops between 2014-2019. Kurnool, Anantapur, Kadapa, and Prakasam are among the top pulse-producing districts in India. Though price support schemes have helped, this shift to pulses happened over the years both due to consumer demand and suitability of cultivation to the local conditions in Rayalaseema and coastal Andhra.

The most ambitious of these approaches has been the Neeru-Chettu programme. Nearly 7000 ponds and 22,000 check dams were repaired with more than a hundred lift irrigation schemes being commissioned or completed by the government in the past 5 years. These initiatives helped farmers additionally irrigate more than 2 lakh acres. The effects of these and other approaches can be seen in the decrease of over-exploited blocks to 45 from 61 between 2013 and 2017 (Rayalaseema alone accounts for 35 of these 45 blocks).

Except for Andhra, other south Indian states reported fewer ‘safe’ blocks between groundwater assessments in 2013 and 2017, indicating increased use of this resource. Andhra itself was able to report a higher number due to the above-mentioned programmes. For its sustainable water conservation and groundwater recharge practices, Andhra Pradesh was ranked second among non-Himalayan states in NITI Aayog’s latest Composite Water Management Index.

As evident from the table below, a commitment to finish constructing long-standing flagship irrigation projects of Andhra Pradesh has faltered in the last financial year. Major projects such as Polavaram and Handri-Neeva have remained stalled. Only half of the planned irrigation projects in Anantapur, Ongole, north Andhra, Polavaram, and the Krishna-Godavari delta regions were completed in 2019-20. Just about a third of the allocated Rs 30,300 crore for major & medium irrigation works and agriculture in 2019-20 was utilised, a decadal low.

Given falling revenues and rising debts owing to the pandemic’s economic ramifications, it is doubtful if these irrigation projects will be completed soon. By providing free borewells, Andhra must not seek the easy way out to fill this vacuum in large-scale spending. 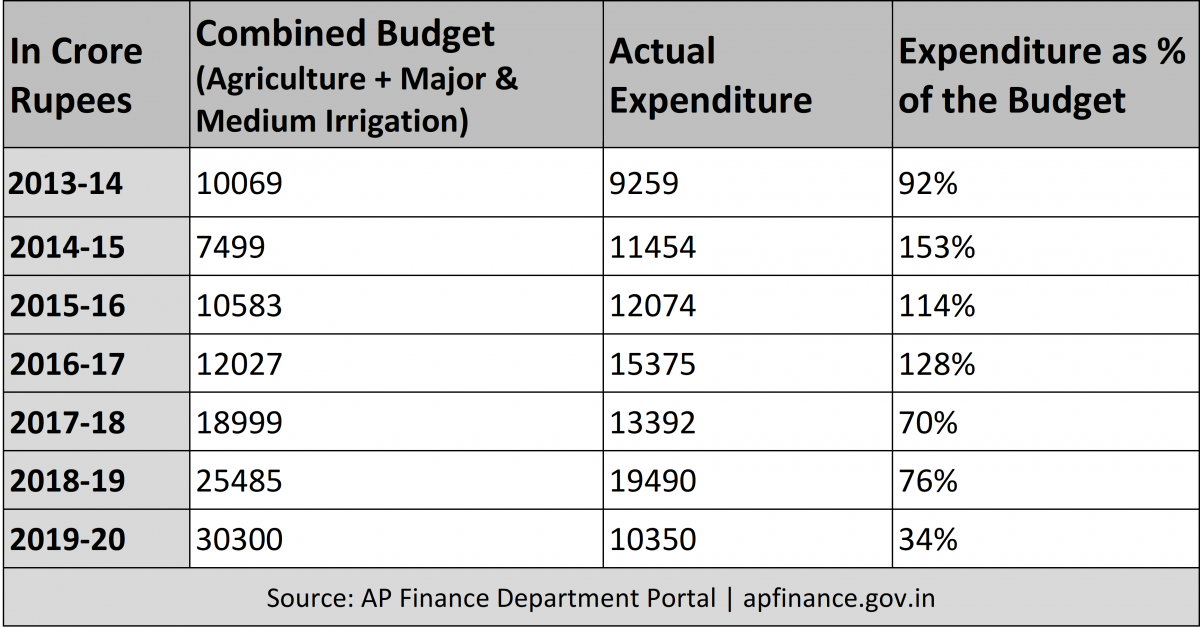 Indiscriminate borewell digging does not mitigate rural distress; it only worsens things for the next government and the next generation to handle.

Gains made over the years stand to be lost by encouraging another wave of borewell digging among Andhra’s small and marginal farmers. It goes against the spirit and practice of APDMP, improving local water resources, and crop diversification. Instead of nurturing crops suited to local landscapes, free borewells might only incentivize another wave of planting water-intensive crops. Like free loans, indiscriminate borewell digging does not mitigate rural distress; it only worsens things for the next government and the next generation to handle.

Instead of announcing free borewells that distort farmer behaviour, we must work on building the infrastructure needed to ensure crops are irrigated, are weather-proof (through technological interventions and landscape-suitability), disaster-proof (through insurance programs), logistics-proof (through robust cold storage infrastructure), and climate-friendly. Banning or fully subsiding something is a reflexive move characteristic of the Indian state to solve any issue. It reflects an inability to tackle complex problems with holistic solutions which have already been shown to work in the state.