A distinct exercise to validate the official estimates of India’s GDP growth during the years 2011-12 to 2017-18 finds that there was an over-estimation in the new series, similar to the conclusions of other critiques of the CSO's numbers.

For more than four years now India’s official numbers of economic growth – as measured by the gross domestic product (GDP) – have been questioned by independent researchers, international organisations and even by some organisations within the Government.

The official statistical agencies have, however, refused to accept that there is a need to re-examine the methodology for GDP estimation and the data used in the estimation.

This article presents the summary results of a distinct exercise that attempted to validate the official statistics.

Questions about the growth numbers first arose in early 2015 when the then Central Statistics Office (CSO) released estimates of India’s national income using 2011-12 as the new base year for estimation of GDP. Such exercises revising the base year are not uncommon. Indeed, they are necessary to more accurately measure the size of an economy as the structure of the economy changes and new data/methods for measurement become available.

[W]hen there have been base year or methodology changes, the resulting GDP growth numbers are known to hardly ever vary by more than half a percentage point or so.

That the base year changes would show somewhat different estimates for overlapping years is to be expected. However, that the differences in the growth rates from the 2011-12 and the 2004-05 series would be so different was entirely unexpected and worrying.

The difference was not only due to base year changes but also on account of the new methodology used by the CSO for aggregating the value of economic output in different sectors of the economy.

It is pertinent to point out that the true level of GDP is hardly ever the issue, but the growth rate of national income is of supreme importance. And when there have been base year or methodology changes, the resulting GDP growth numbers are known to hardly ever vary by more than half a percentage point or so and that too for at best for four quarters.

Many have offered critiques of the official GDP growth numbers.

The RBI in its December 2015 Quarter Review had expressed doubts about the growth figures of the new 2011-12 series. Similarly, the Economic Survey of 2015-16 had also cast doubts on the estimates and hoped that the anomaly between the old and new series estimates would be overcome in the subsequent figures.

The Economic Survey further went on to suggest that there were no instances of growth as high as 7.0 to 7.5% anywhere in the world when exports, investment, electricity and credit growth rates were as low as they were at the time in India, leaving the reader to draw her own inference about the veracity of the new growth rate estimates.

Independent researchers were in the forefront of making critiques of the new GDP growth numbers. Dholakia, Nagaraj and Pandya (2018) had pointed out the problems in the new approach: that in using the more comprehensive Ministry of Corporate Affairs (MCA) data base on the output of companies, many imputations had to be made which could have let biases creep in. They had also asked for much more and detailed information on the methods and procedures used in the estimation to enable an open and informed debate on the issues they had raised.

Arvind Subramanian, who as Chief Economic Adviser at the time was the architect of the same Economic Survey of 2015-16 which made the veiled criticism of the new numbers, put out a working paper in June this year formally arguing why India’s growth rate since 2011-12 could not have been as high as the official estimates seemed to imply. He also put a more likely figure to the average growth rates in the period since 2011-12, estimating them to be in the range of 4 to 4.5% per annum, compared to the official figure of as much as around 7%.

The Economic Advisory Council (EAC) to the Prime Minister made an official rejoinder to Subramanian’s critique. Many of the members of the EAC wrote in the media arguing against both the method used and the veracity of the claim. Subramanian has followed with a fresh paper that included the original analysis and also addressed other questions, including the one that he had not as CEA raised on issues regarding measurement. Now in a new July 2019 paper, he has addressed the methodological questions that were raised by the EAC and confirmed his previous analysis,

Good policy demands that the methodology of estimation and the quality of the database be reviewed.

Interestingly though, in January 2019 well before Arvind Subramanian’s paper, I had co-authored with Tejashwi Kumar, a working paper of the Indian Institute of Management, Ahmedabad1, where we had attempted to validate the new growth rate estimates when they seemed to be at variance with the low growth in many sectors that senior managers had experienced.

We found that over the period of overlap (2011-12 to 2017-18) there was a wide disparity in growth rates. The difference between the old and the new series over the period of overlap of the first  three years (2011-12 to 2013-14) is as much as 1.3% which is again confirmed by the exercise which gives a difference of 1.2% over these three years. This reduces to 0.36% when the period up to 2017-18 is considered. The exercise has a better reliability over the first three years of extension of the old series.

We developed a model for GDP growth in various major sectors as a function of the growth of physical and near physical indicators in these sectors. We used this to extend GDP on the 2004-05 series to the years 2011-12 to 2017-18 for which the 2011-12 series had been officially used.

(The technical details are available in our January 2019 paper cited above. The results are mentioned below)

The parameters of the models for manufacturing are robust, and all models give almost the same measure of the growth rates over the period 2011-12 to 2017-18. The estimates of growth through such forward projection of GDP (2004-05 base) are available for each quarter up to the third quarter of 2017-18.

In manufacturing, over the years 2012-13, 2013-14 and 2014-15 when the projections made with the old series are the most reliable, we get an average growth rate of 0.77%, while the new series officials records an average growth of 5.94%, which is quite an incredible difference.

For the services subsectors, since there are hardly any direct physical indicators of performance, the indicators used are a combination of price, sales, credit, and export and import of services. Price indices of nearly 20 items (CPI-IW ) for which the longest series were available constituted the set of price indicators. The net sales pertained to 16 items, and the “inflows” and “outflows” (i.e. exports and imports) to 20 items. The dependent variable is the growth in GDP (2004-05 base) in the particular subsector of the services sector, at constant prices.

For the agricultural sector the growth rates as in the new 2011-12 series were “accepted” since there was no way to check for their veracity. In any case the seasonality in the quarterly GDP figures in both the old and the new series is very much dependent essentially on the way the statistical authorities break up the annual figures into the various quarters.

Combining the subsector growth levels by using weights as in the older series results in the overall GDP estimates and hence growth rates for the period (2011-12 to 2017-18 in this exercise) covered by the new series.

These are reported in Table 1 below. 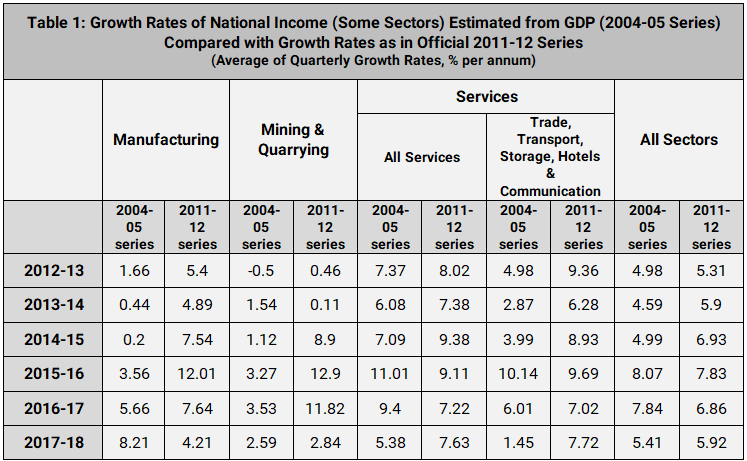 We see that there is significant overestimation in the official series in the overall growth rates – on an average by about 1.3 percentage points over the period 2011-12 to 2017-18. Yet in some quarters there is underestimation as well. In the manufacturing, and trade, storage etc. sectors, the overestimation is much higher.

Our approach is very different from that of Subramanian. It still supports the findings of Subramanian that indeed the growth rates, especially of manufacturing, and trade, transport, storage and communication, are overestimated in the new 2011-12 series. Being based on physical indicators it is an entirely different way of attempting to validate the official estimates.

Our unique exercise – different from that of the former Chief Economic Advisor – shows that the official numbers of GDP growth post 2011-12 in the new series cannot be validated. They are certainly over-estimated. Good policy demands that the methodology of estimation and the quality of the database be reviewed. So far the official response be it of the CSO or the EAC has been to dismiss all criticism of the growth rates in the 2011-12 series.

It is important that the expert statisticians from both within and outside the government go deeper into the methods of estimation including the extrapolations and imputations therein.

Errata: The blurb and the paragraph beginning "We found that over the period of overlap..."  were corrected on 8 September to present a more accurate reading of the figures in Table 1.

This article was last updated on September 08, 2019

Sebastian Morris teaches at the Indian Institute of Management Ahmedabad.

Sebastian Morris teaches at the Indian Institute of Management Ahmedabad.

States have resorted to anti-migrant legislation to paper over failures to create adequate and quality jobs. These policies neither work nor aid development.
Published On: November 09, 2022 Updated On: December 03, 2022

The annual public debate over the poorly constructed Global Hunger Index is all hot air; in the process the critical issue of child undernutrition in India, where authentic data is available showing very slow improvement, gets ignored.
Published On: November 09, 2022 Updated On: November 11, 2022

Bad loan problems at state-run banks have so far been resolved through massive taxpayer-funded bailouts. There must be a revaluation of a broken credit culture that virtually protects big borrowers.
Published On: October 26, 2022 Updated On: November 03, 2022