Our apologies for intruding. Please spare a couple of minutes.

The India Forum is an experiment in reader-supported publication. It is free to read; it carries no ads and it is free of commercial backing.

To make this work and to continue to bring you thoughtful comment on a range of contemporary issues, we need your help.

Please begin with a donation to the Vichar Trust.

Raindrop in the Drought

Producing food security in Marathwada
Godavari Dange developed a model of farming that enabled vulnerable women farmers in drought-struck Marathwada to stay food secure. Her life story captures the enormity of the region’s crisis, as well as the possibility of sustainable and resilient agriculture

Raindrop in the Drought: Godavari Dange (‘दुष्काळात पावसाचा थेंब: गोदावरी डांगे’) illustrates the life and work of Godavari Dange, a farmer and feminist leader in the drought-affected Marathwada region of Maharashtra. Despite her tragic personal life, Dange emerged to back other women to fight their own difficult circumstances. She has supported more than 50,000 women to survive cycles of failed monsoons, by developing a unique model of farming that enables small farmers, particularly Dalit and Adivasi women, to grow food crops using very little water. 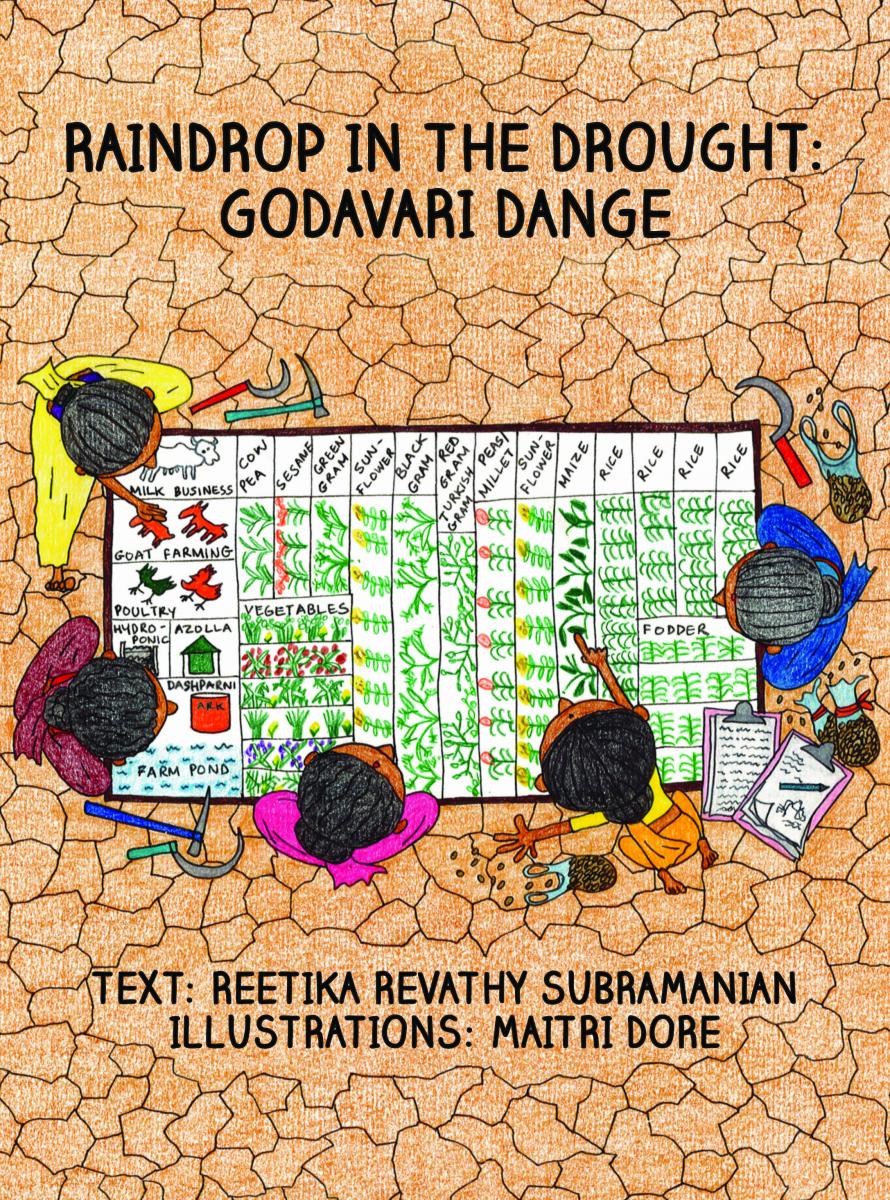 The story is situated in the epicentre of India’s agrarian crisis: the Marathwada region in central Maharashtra. The hardships in Marathwada’s rural economy are an outcome of decades of inequity, caste- and gender-based exclusions and discriminations, unscrupulous nexuses between politicians and sugarcane factory owners, and scratchy policymaking. Repeated and severe spells of drought in the past decade have further exacerbated these inequalities. The region has an alarming number of farmers dying by suicide, high maternal and infant mortality rates, poor nutrition levels, soaring school dropout rates among girls, and a spike in child marriages. Over three-quarters of the four million farmers of Marathwada own small and marginal holdings of no more than four acres of land. Tens of thousands are landless labourers, a legacy of the region’s historical backwardness and deep-rooted caste-based politics. Thus, even as Maharashtra is on the road to becoming a trillion-dollar economy by 2025, Marathwada remains far behind. 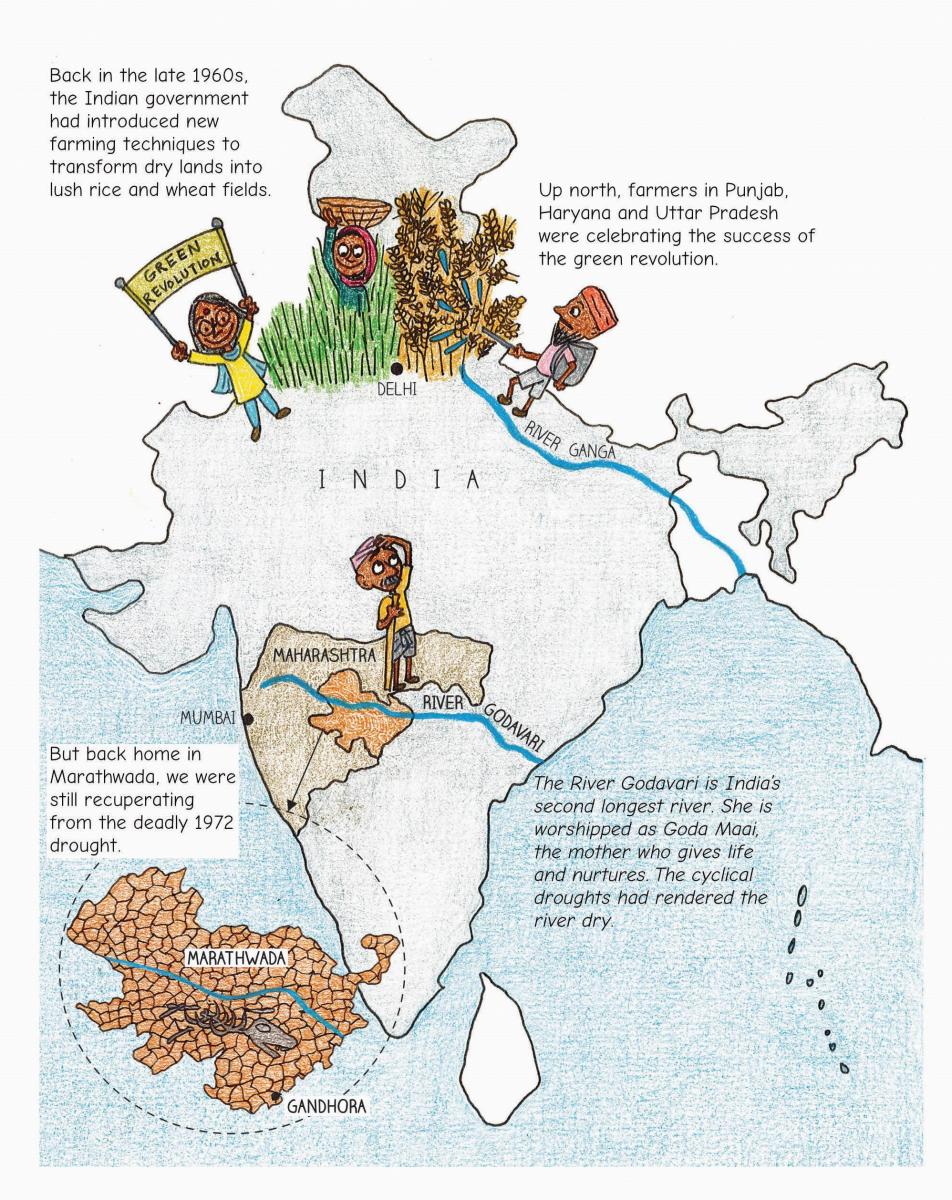 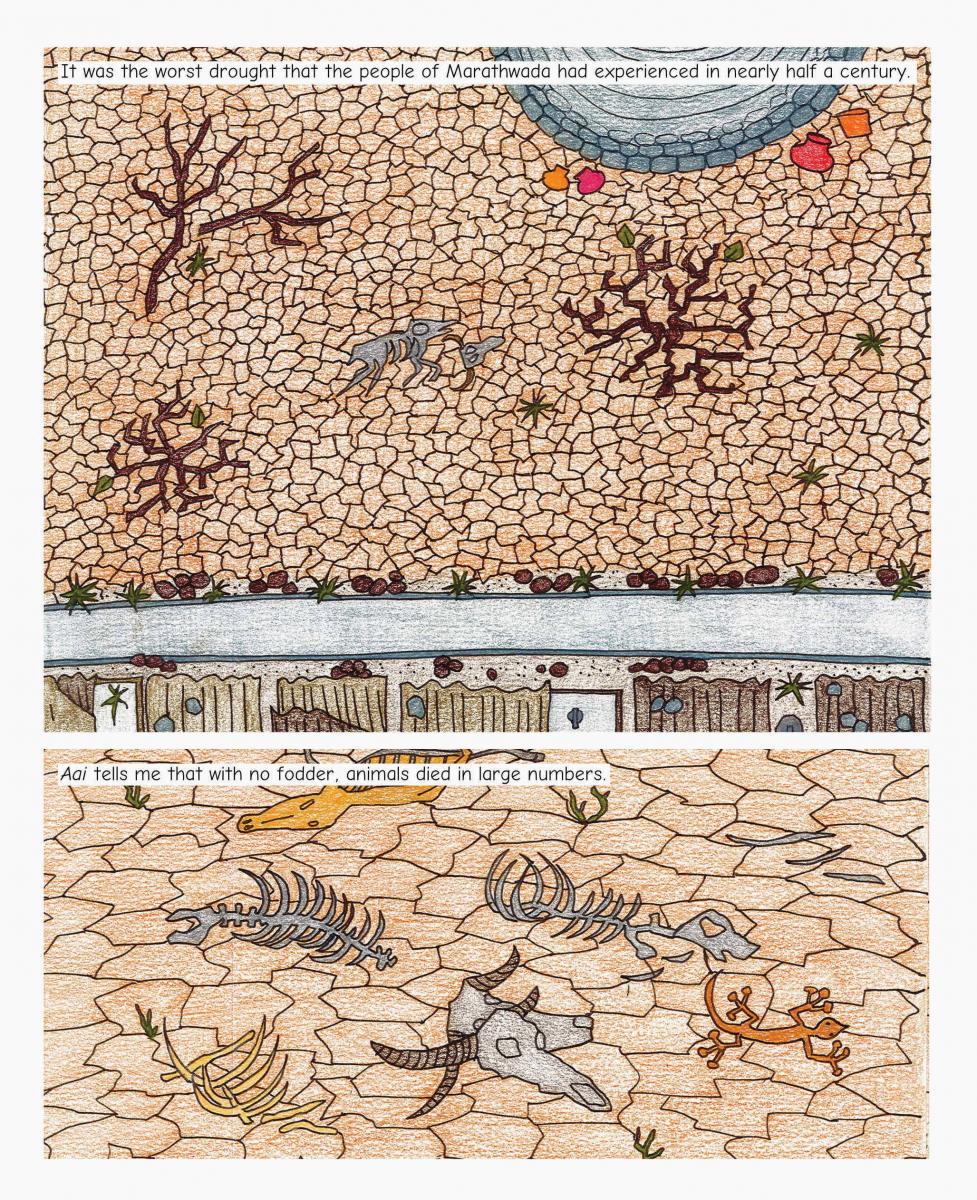 Women make up more than half of the workforce in India’s agriculture sector. The majority of them toil on family farms and small plots of land without any payment. In any cropping season, women are estimated to invest 3,300 hours in sowing and harvesting, as compared with 1,860 hours by men. Yet, their massive contribution goes unrecognised, both at the hands of families and the government. Most women remain poor due to multiple barriers, including lack of access to credit, technological inputs and upgrades, and most importantly, assets and land. A 2013 report by Oxfam found that in India, only 12.8% of women own land in their name.

Raindrop in the Drought: Godavari Dange opens with Dange’s birth. She was born soon after the 1972 drought — the worst Marathwada had witnessed in half a century — and grew up against a backdrop of crippling drought. She was named after the Godavari river that cuts through the water-starved region to provide some relief. Worshipped as Goddess Goda Maai, the river is no less holy for the locals than the Ganga. However, the cyclical droughts had rendered parts of the river dry.

It was Dange’s early years that defined the course of her life. Growing up, she witnessed up close the ravages of drought. She was forced to drop out of school at the age of 13 and marry at 16. In the brief intervening years, she developed an interest in organic farming, apprenticing on a neighbour’s farm, and learning to grow food crops like lentils, millets, and leafy greens. The experience was formative in her understanding of sustainable farming and the injustices faced by women farmers. 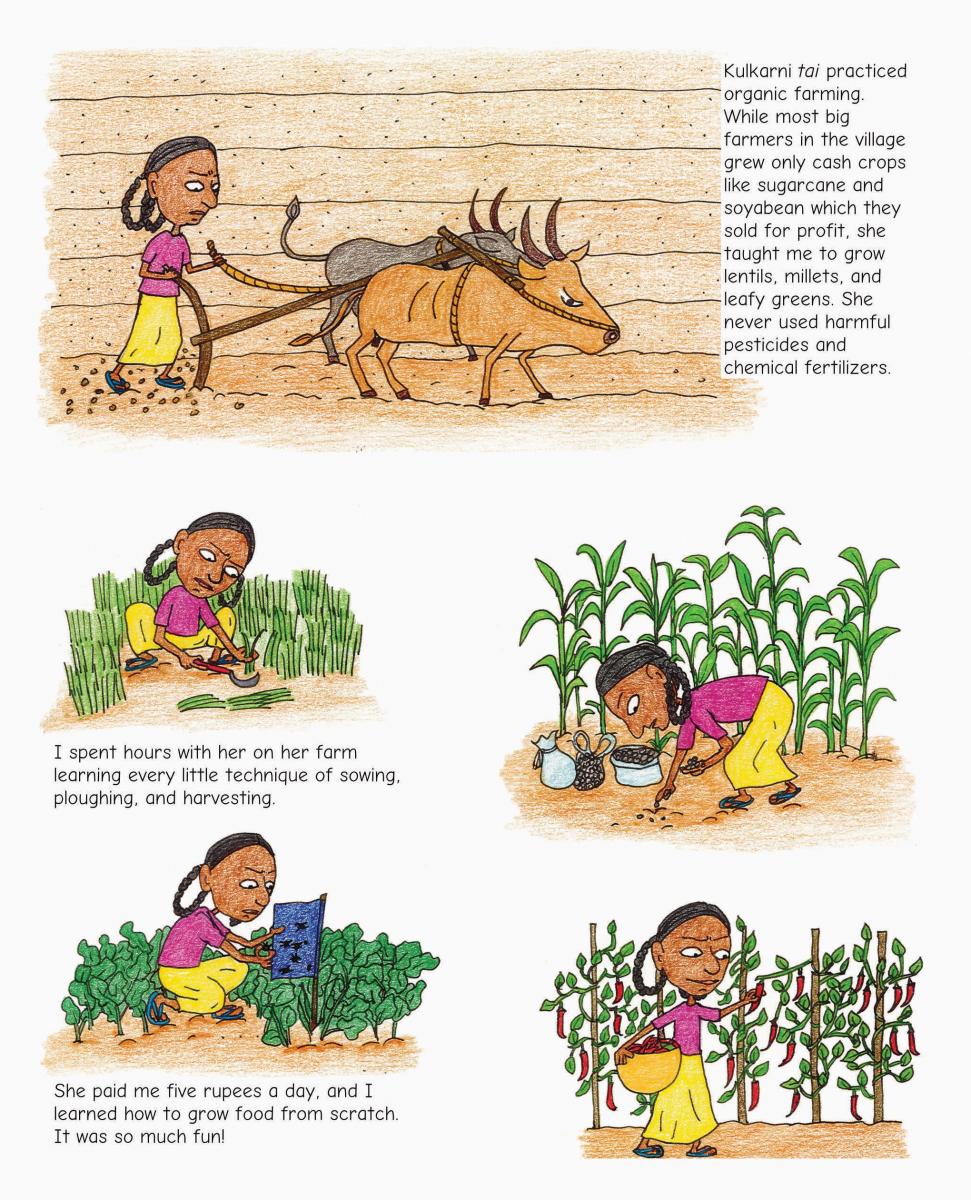 In 1998, when Dange was 21, her husband died in a road accident. Hamstrung by grief and the social pressures of being a young widow, she moved back with her two small children to her childhood home in Gandhora. A year on, jolted by the realisation that her children needed her, she began to claw her way out of her misery. With a growing resolve to piece her life back together, she found work in a local bachat-gat, a small-savings group for women run by Swayam Shikshan Prayog (SSP), a local NGO. When Dange joined the group, she was struck by the women’s stories of tragedy. They deepened her resolve to rebuild her own life. In working to help others, she found a new purpose. 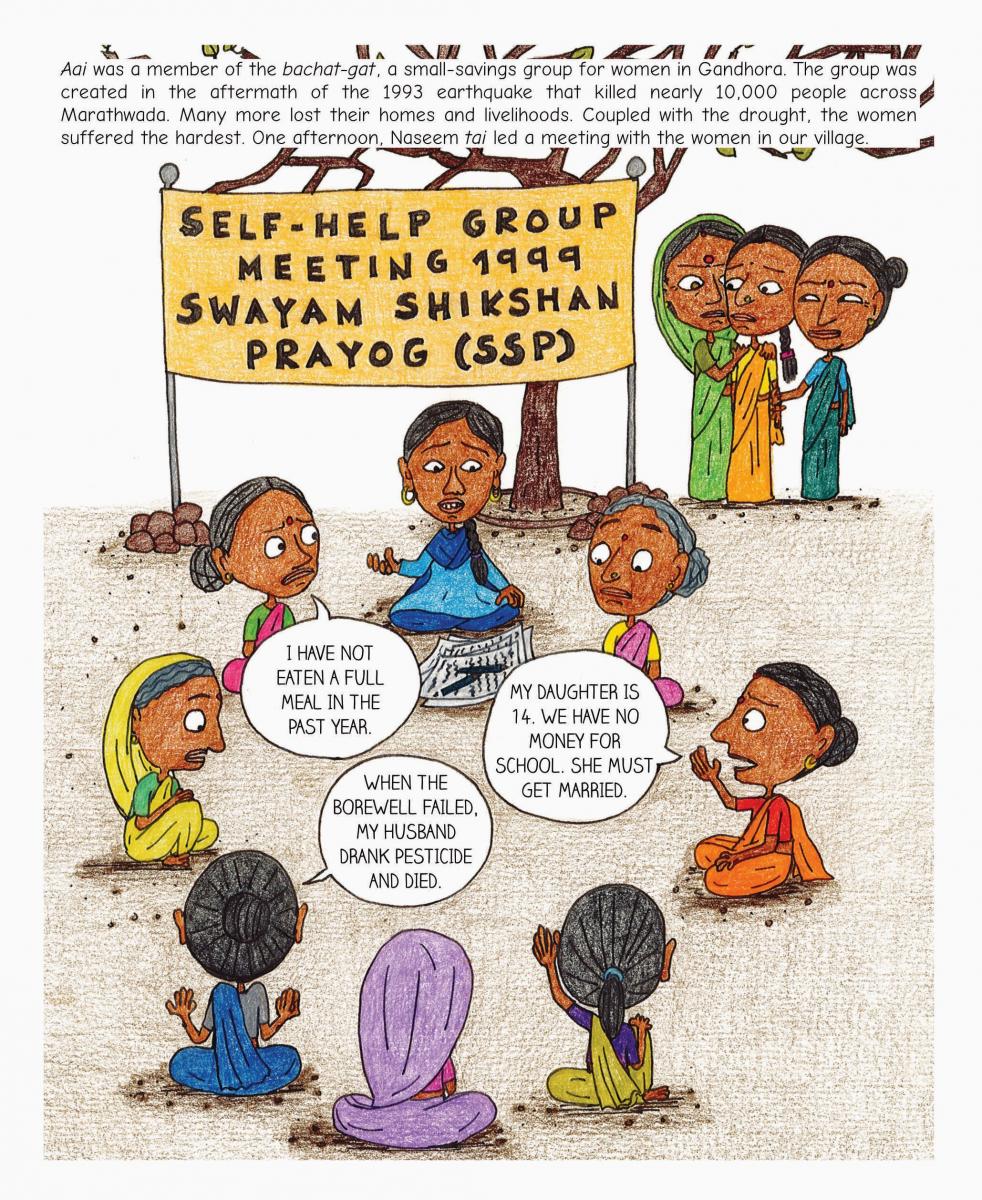 The one-acre model has its genesis in 2007, when Marathwada was hit by yet another drought. With rich farmers sinking even deeper borewells in desperate attempts to irrigate their cash crops particularly the water-guzzling sugarcane, the poorer women farmers stared at another year of uncertainty, loss, and hunger. The extent of malnourishment, particularly among women and girls, was very high. At this point, Dange, digging deep into her years as a farmhand, suggested that the women try something seemingly radical —grow food crops instead.

The opposition was fierce. Many husbands refused to spare even half an acre of land for them. Most community stakeholders vehemently opposed this suggestion, claiming that the focus had to remain on cane and other cash crops. Eventually, an old friend of Dange’s came forward. On Dange’s guidance, she grew a mixed set of crops, including leafy vegetables, millets, and pulses. 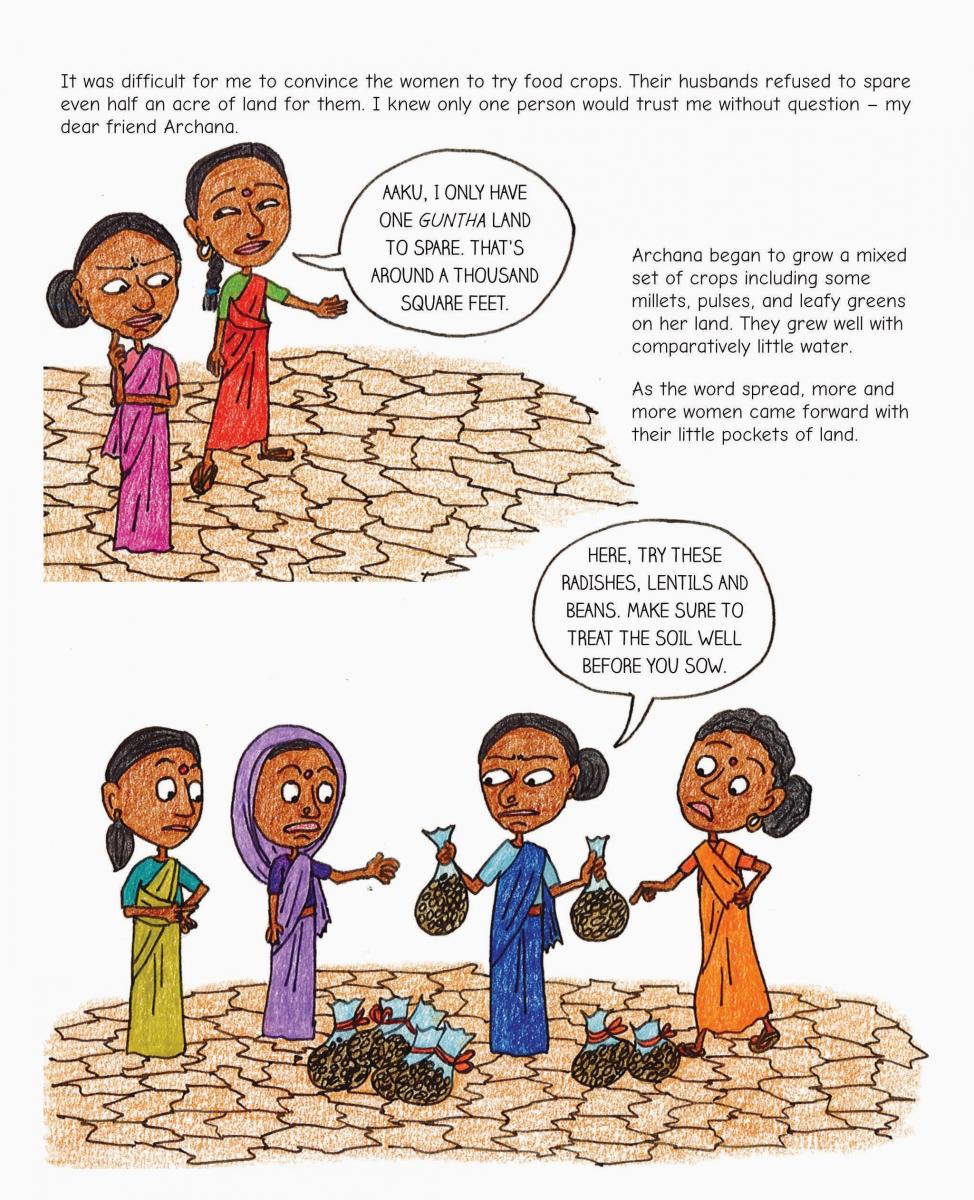 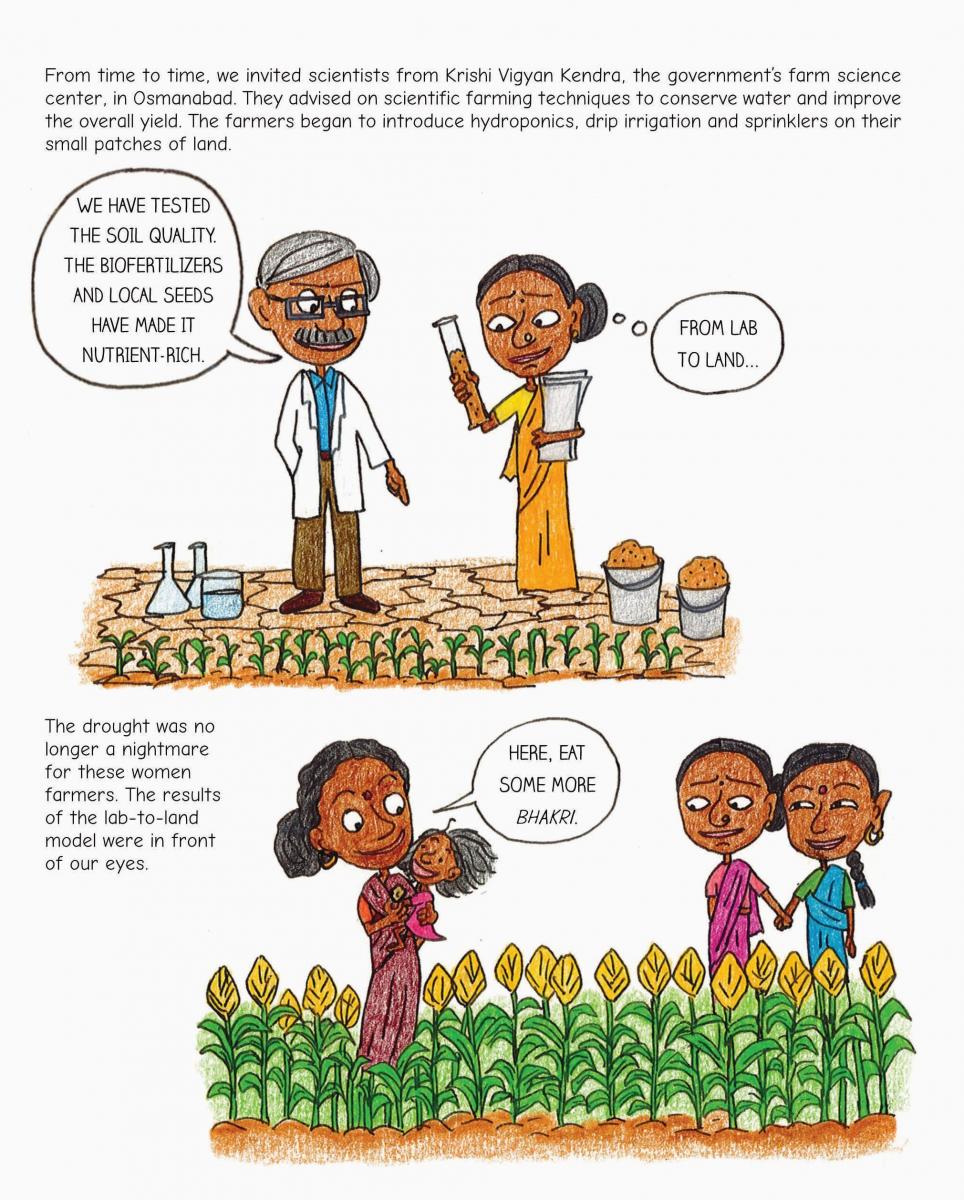 As the crops grew well with comparatively little water, the word spread. More women emerged, their scepticism ebbing as their radishes and beans flourished. Emboldened by these modest yet promising victories, the women invited scientists from the Krishi Vigyan Kendra to advise them on scientific techniques to conserve and improve yield. The women farmers adopted hydroponics, drip irrigation, and sprinklers on their small patches of land. As ideas germinated through dialogue between the lab and the land, drought slowly ceased to be a nightmare for them.

The lab-to-land model was progressively tweaked over years and through trial and error into a full-fledged one-acre model that combines local climate patterns with the social pressures on women. The model supports 36 varieties of drought-resistant and short-term crops – including leafy vegetables, grains, and lentils – on plots as small as half an acre.

Many of the women, however, continue to deal with abusive husbands, upper-caste village headmen, and unsupportive government authorities. But on the flip side, as the results of the model came in, even some men relented, turning to Dange to show them the ropes of food crop farming.

In the early days of the Covid-19 pandemic, hunger and distress began to mount as the nation locked down, interstate borders were sealed, and markets shut. Despite all of this, the women farmers managed to stay afloat, with fresh food from their one-acre plots feeding their families. Some of them even had surplus produce, which they sold in the local wholesale markets for a profit. As part of the Vijayalakshmi Sakhi Producer Company, comprising women farmer shareholders, they bargained for the right price in the hostile, male-dominated market. Seeing these successes, even more farmers — both women and men — have embraced the one-acre model. 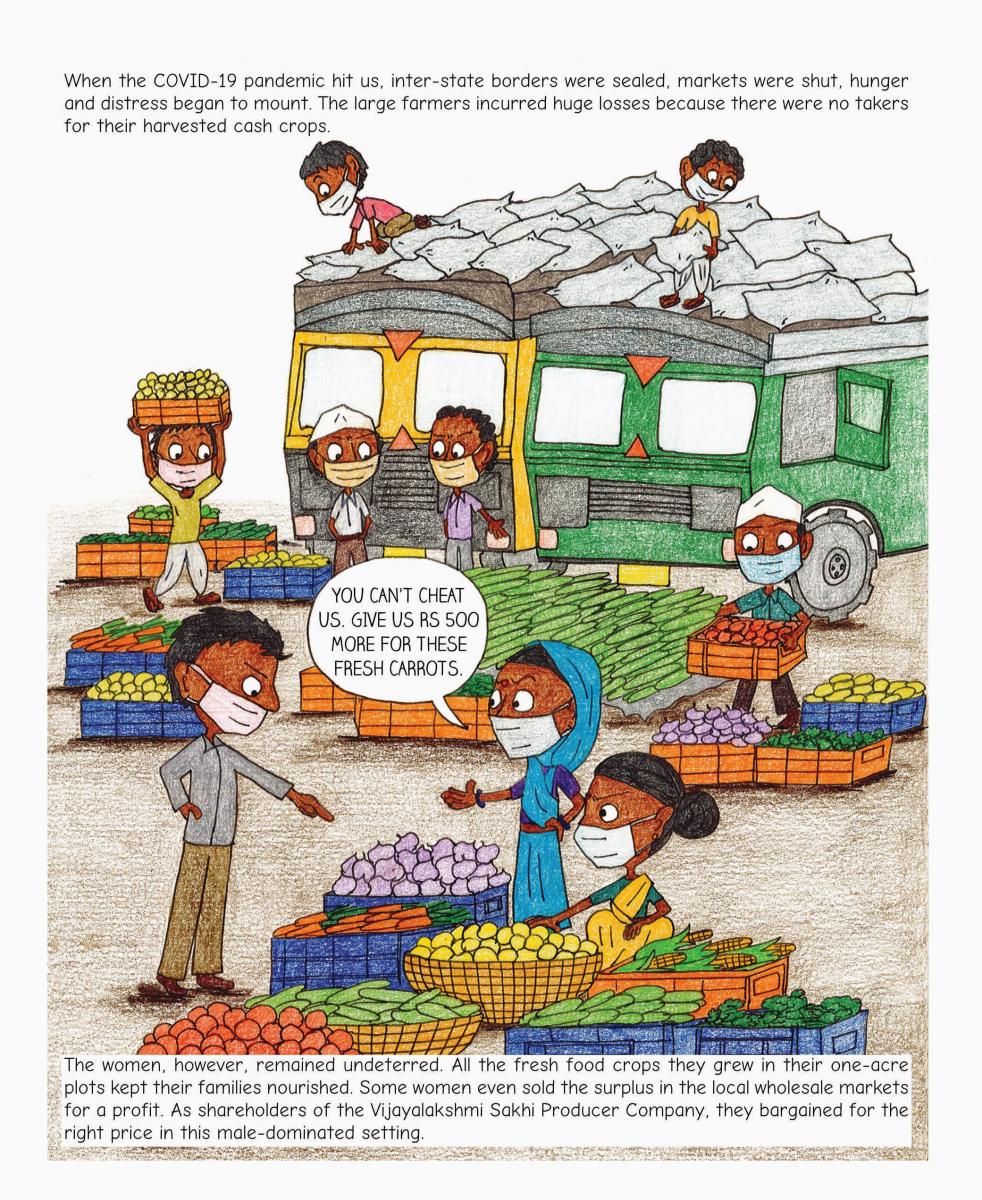 Raindrop in the Drought: Godavari Dange

Despite her phenomenal work and contribution to lifting thousands of families out of hunger and poverty, Dange’s story remains largely untold.

In 2020 we won a grant to make a comic book about a woman or grassroots feminist movement from the Global South. As we scoured the internet for local leaders, we stumbled upon one of Dange’s very few appearances in the English media. Her experiences spotlighted the intersections of gender with labour and agriculture, a dimension that is not adequately emphasised in the feminist movement. Reetika’s PhD research is based in Marathwada, and through contacts at Swayam Shikshan Prayog we were able to establish contact with Dange and get her consent to chronicle her life and work.

Our account contextualises Dange’s specific circumstances that led to the one-acre model within the wider history of the region. The narration in our comic book, which has both a Marathi and an English version, constantly zooms in and out across scales, to capture the enormity of her personal tragedy as well as that of Marathwada.

We have tried to always be conscious of our own identities and privileges as city-bred upper-caste women, which is why it was important to build a collaborative way to tell this story. Wherever possible, the narration and dialogue rely on Dange’s own words, as extracted from our interviews with her. In all, we conducted over 20 interviews across two trips to the region, with Dange, her friends, family, and colleagues at SSP.

Throughout the process, we showed Dange our illustrations and text as it developed and sought her feedback through a three-way Whatsapp group. She, in turn, furnished us with photos from her childhood and other relevant information on her life and work. These interactions helped us to include such details as the way Dange tied her hair as a girl, the way her mother organised utensils in her kitchen, or photographs on walls of her home; elements which furthered the storytelling.

It is immensely fulfilling that the comic has now taken on a life of its own. Thanks to the efforts of Dange, SSP, and the local community, it has caught the attention of the local district collector and will be circulated in the government-run schools in Osmanabad district. Dange has also shared the book with the other women farmers (including her mother), many of whom are illiterate. We hope that the comic format transcends linguistic barriers, and her story reaches everyone. 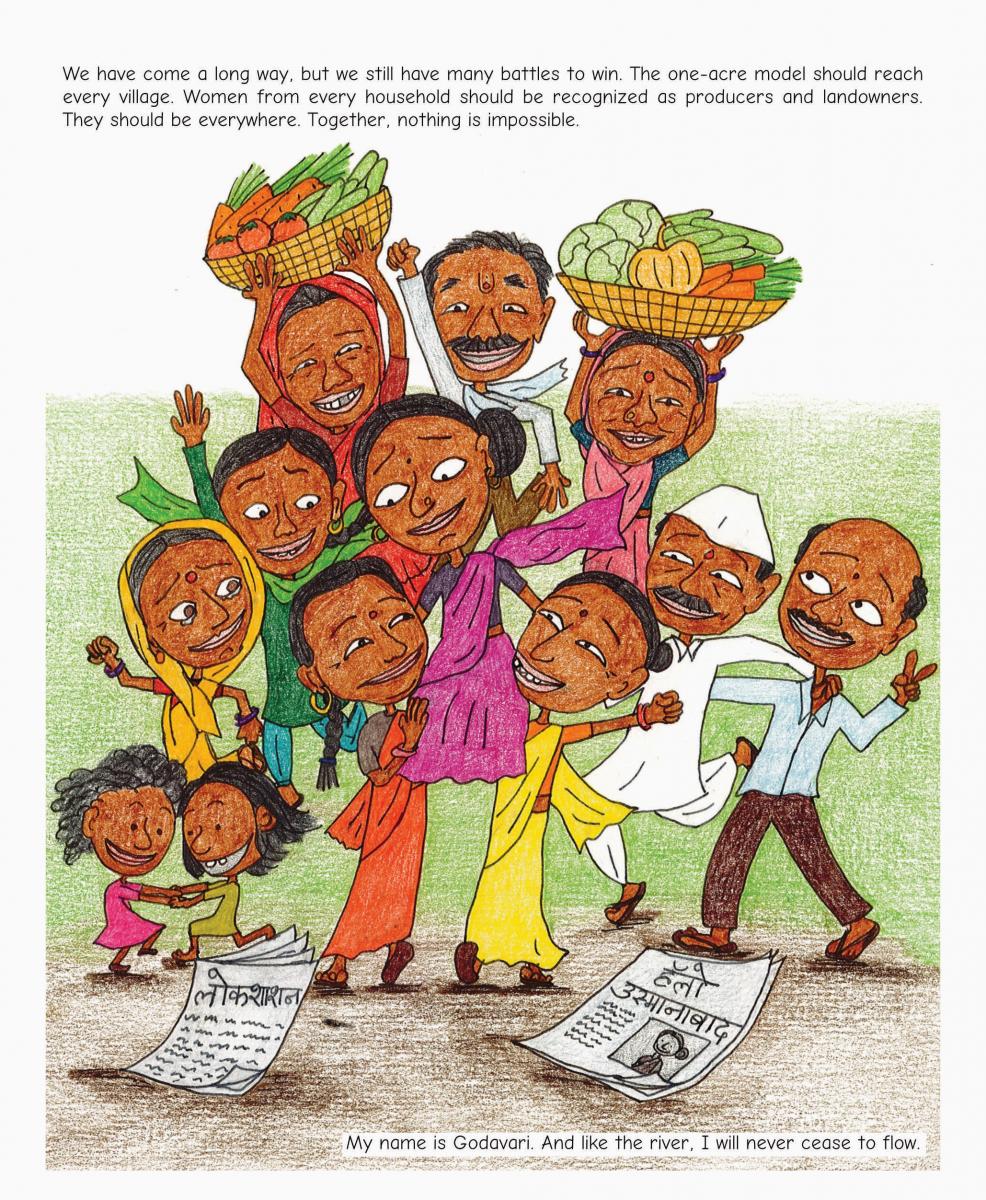 The success of the one-acre model lies in its sustainability and resilience. It has tided these women and their families over several disastrous droughts and a once-in-a-century pandemic. Dange however sees these successes as the tip of the iceberg yet. Her dream is for the model to reach every village, so that women will be recognised as landowners and producers in their own right. This means ever more mobilisation and collectivisation at the local level.

After all, in Dange’s own words, “Together, nothing is impossible.”

This comic book was created as a part of Goethe Institute (Indonesia)’s Movements and Moments: Feminist Generations project. You can read the entire comic (in English or Marathi) here.

This article was last updated on February 04, 2022

Reetika Revathy Subramanian is a journalist. She is pursuing a PhD in multi-disciplinary gender studies at the University of Cambridge.

Maitri Dore is an architect and illustrator. She is a PhD candidate at the Department of Conservation, University of Gothenburg, Sweden.

Reetika Revathy Subramanian is a journalist. She is pursuing a PhD in multi-disciplinary gender studies at the University of Cambridge.

Maitri Dore is an architect and illustrator. She is a PhD candidate at the Department of Conservation, University of Gothenburg, Sweden.

Enforcing the Ban on the ‘Two-Finger Test’

Loss and Damage Fund: A Step Towards Climate Justice, Finally

Ending an impasse over the reluctance of developed countries to compensate developing nations for the damages caused by climate-related disasters, COP-27 achieved a major breakthrough by establishing a Loss and Damage Fund to help people recover from devastating climate impacts.
Published On: December 21, 2022 Updated On: December 23, 2022

At COP-27, Climate Change Mitigation Takes a Back Seat

Despite alarming evidence about the pace of global warming, COP-27 failed to raise climate mitigation ambition. While the 1.5°C limit was salvaged in the end, the lack of consensus on fossil fuel phase-down/phase-out scuttled the possibility of meaningful mitigation action in the coming years.
Published On: December 20, 2022 Updated On: December 23, 2022