What Made the East India Company So Successful?

Analysis Goes Missing in Dalrymple
William Dalrymple's book on the East India Company is written very well and has a great deal of detail. But the writing of good History needs more. It calls for a consideration of all relevant facts and a comprehensive analysis. This is unfortunately missing.

The Anarchy: The East India Company, Corporate Violence, And The Pillage Of An Empire By William Dalrymple, Bloomsbury, Rs 699.

Catchy titles are the serious writers’ fatal attraction. It will remain a puzzle why William Dalrymple chose to call his book The Anarchy when it so successfully describes the most comprehensive act of organised plunder of a country by an English merchant company with the full backing of the English government. There was nothing anarchic about the plunder that Dalrymple’s book reveals with riveting detail. Yet one is left with the title of the book.

Dalrymple is not unaware of this and therefore offers a justification. He says that certain eminent historians, among them --- Muzaffar Alam, C.A. Bayly --- have argued that, popular perception notwithstanding, after the Mughal Empire began to disintegrate as a centralising force, India did not descend into anarchy and economic decline. On the contrary in large parts of India --- the former subahs (provinces) of the Empire --- trade and economic activity continued to flourish under strong rulers. The most notable of these areas were Bengal, Awadh, Mysore, the Maratha Confederacy and Haiderabad. No serious historian of 18th century India doubts the significance of this interpretation.

Dalrymple, however, believes that this revisionist view of the eighteenth century has gone a little too far. His reasons are that a "disconsolate Mughal gentleman", Fakir Khan, described India during Mughal decline as "the abode of Anarchy". This opinion of one disenchanted elite is reinforced, in Dalrymple’s view, by travellers who came to India in this period: apparently the arrival of anarchy was a truth widely acknowledged. I find this argument a trifle disingenuous for at least two reasons. First, because a "disconsolate Mughal gentleman" could hardly have failed to bemoan the passing of the Empire since his own fate and fortune were tied up with those of the local Mughal elites. It is much less likely that such a person would have known what was happening beyond Delhi and Agra. And, second, travellers, almost by definition, leave impressionistic accounts. Are these to be valued more than the conclusions of historians who have examined not just passing opinion but based their analysis on solid documentation?

If indeed the 18th century was a period of anarchy and decline, the infamous English East India Company would have had little to loot and plunder. It is precisely because they found areas like Bengal and Awadh rich and prosperous that they decided to despoil them systematically. In fact, it was looting by the Company that perpetrated the anarchy in the second half of the 18th century when ---- its position dominant and its self-confidence supreme ---- it eroded the sovereignty of the Nawabs of Awadh even as it militarily defeated other regional rulers. In the first half of the 18th century, before the battle of Buxar (1764), the signs of anarchy, beyond Delhi and Agra, were, in fact, not that prominent. By its organised loot the Company brought forth the anarchy and impoverished India.

Narrative history at its best blends the telling of a story with an analysis of the events that it narrates. Dalrymple’s account leaves out some details that more careful historians consider vital.

Dalrymple describes the intervention of the Company in the affairs of regional powers in India as a "disruption" and not as a precipitator of the anarchy. The irony is that Dalrymple’s narrative makes vivid the Company’s planned plunder and its contribution to the anarchy without quite making this crucial analytical point. It seems even more ironic, thus, to find Dalrymple subscribing to the view that the 18th century was a period of decline --- a Dark Age ---  a view that an older generation of mostly pro-imperialist historians perpetuated and continue to perpetuate.

Narrative history at its best blends the telling of a story with an analysis of the events that it narrates. Dalrymple’s account leaves out some details that more careful historians consider vital. He misses out, for instance, the fountainhead of his own narration, which consisted in the granting of a farman (royal order) to the English East India Company by the Mughal Emperor Farrukhsiyar in 1717. This farman, the outcome of an English delegation headed by John Surman to the Mughal court, was at the root of the conflict that led to the battle of Plassey in June 1757.

According to the farman, all goods carried by the Company’s factors (servants) were to be free from customs duties. The goods, in other words, were covered by a dastak, (free pass). The farman also contained other important concessions to the Company --- the rent of 38 villages adjacent to Calcutta; and the permission to use the royal mint for minting coins out of its imported bullion. The dastak became the bone of contention between the Nawab of Bengal and the Company. The latter claimed that free pass included the private trade of the Company’s servants, whereas the Nawab argued that it covered only the trade of the Company. The Company’s claim had no basis since, according to Robert Orme, the imperial wazir (prime minister) in Delhi had refused to extend the privilege of duty free trade to the goods of the Company’s factors. 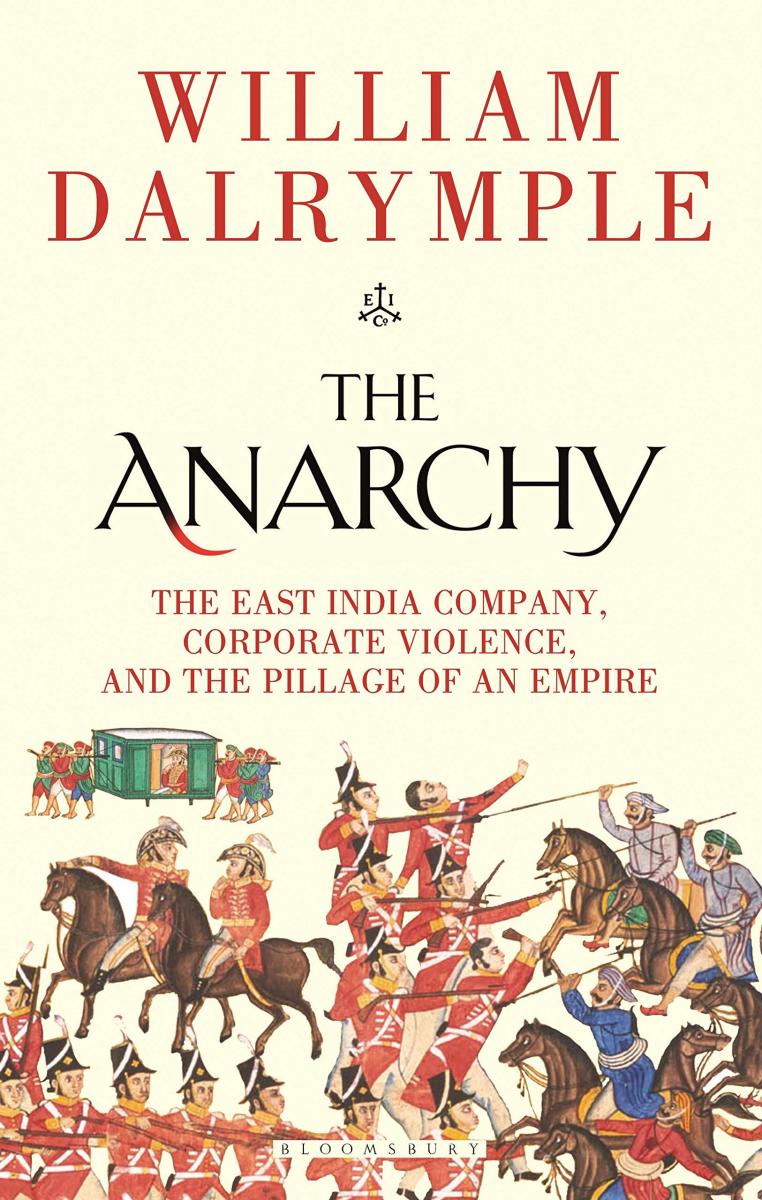 The Company, in spite of protests from successive Nawabs, especially Alivardi Khan, continued its operations according to its own baseless interpretation of the royal order. The Company was, thus, as the Nawabs pointed out, defrauding the exchequer of valuable revenue as the Company’s servants were refusing to pay duties by claiming their goods were covered by the dastak. I have delineated this sequence at some length because this is really how the plunder of Bengal and therefore the anarchy began --- by the East India Company’s refusal to pay the Nawab his legitimate dues which all other merchants, foreign and Indian, were paying.

Sirajuddaulah, in 1756, decided to put an end to this situation by sacking Calcutta: the provocation for the military encounter at Plassey. Dalrymple, because he overlooks the farman and the controversy that emanated from it, seems to think Siraj’s attack on Calcutta and then Plassey were products only of Siraj’s anger at the fortifications the Company had erected in Calcutta. He sets aside the question of the dastak, private trade and the consequent defrauding of the exchequer by the Company. This is akin to playing Hamlet without the ghost.

The omission seems perversely deliberate since Dalrymple’s bibliography includes Brijen Gupta’s classic Sirajuddaulah and the East India Company, 1756-1757, a book which lays out with great clarity the context of the conflict between Siraj and the Company. This wilful negligence is also related to Dalrymple’s exclusion of the issue of private trade --- what was called the "country trade" --- and its role in the plunder and the formation of the early British Empire in India.

The issue was a complex one because a very blurred line demarcated the private trade of the Company’s servants and the trade of the Company. By the royal charter, the English East India Company was granted the monopoly of trade in Asia. But from the very beginning the Company encouraged a violation of this monopoly by allowing its servants to trade on their own and amass personal fortunes. The Company did this because it actually paid its factors a pittance. The low salaries were compensated by opportunities of trade allowed to factors in their private capacity. The Company acted to protect the private trading interests of its employees. Witness the context of Plassey. The dynamics of private or country trade represented a crucial aspect in the loot and plunder of India and in advancing the economic and political frontiers of the English in India. This was made clear many decades ago in that pioneering and unforgettable book by Holden Furber, John Company at Work, again a volume that serious historians know to be indispensable but one that Dalrymple ignores in his text and his bibliography. When, after the battle of Buxar (1764), Awadh was opened up to the Company, private traders (i.e. Company’s servants) also entered that kingdom to trade and extort.

No company before or since has operated on such unique terms where turnover equalled gross profit.

One very important consequence of Buxar --- and Dalrymple very correctly emphasises this --- was the grant of the diwani (the right to collect the land revenue) of Bengal to the Company. This placed the Company in a unique position as a trading company. Dalrymple notes this but rather trails his coat by making an elementary error in economics. He writes that after the grant of the diwani the land revenue of Bengal was conceived of as the gross profits of the Company. This is wrong. What happened was the following: the land revenue of Bengal served as what in the Company’s lingo was called the Investment (the money needed to buy commodities in India) and to finance the China treasury to buy tea. The purchased commodities and the tea were then sold in Europe and Britain at a mark-up. This turnover became the gross profit of the Company since it had made no investment out of its own funds. No company before or since has operated on such unique terms where turnover equalled gross profit. There is a distinction --- and Dalrymple surely knows this ---- between investment and turnover.

For the convenience of his readers, and before he begins his dramatic story, Dalrymple sets out the dramatis personae in which the historian will notice another glaring omission, for here he fails to include Jagat Seth who, as Dalrymple notes in his account were politically and financially important in the 18th century and were bankers to the Company, and conspired with Clive against Siraj and later against Mir Qasim as well. The negligence may seem small, but it is, in fact, considerable and therefore unfortunate.

Dalrymple writes with great fanfare and in precious detail. One misses the analysis. His book reiterates the importance of good writing in the making of popular historical narrative but it also reveals that the historian’s craft (to invoke Marc Bloch’s famous phrase) demands more than delightful storytelling.

Rudrangshu Mukherjee is Chancellor and Professor of History, Ashoka University

Rudrangshu Mukherjee is Chancellor and Professor of History, Ashoka University

The Smoke and Mirrors of Casteism in the US

Convoluted arguments that equate anti-caste activism in the US with 'Hindu-phobia' seek to reinstate casteist norms that dominant-caste immigrants are accustomed to.
Published On: June 08, 2022 Updated On: June 11, 2022

How India’s Courts have Helped Escalate Hindutva Claims on Mosques

Sri Lankan Peoples' Protests of 2022: The Present from the Past

The protests that have swept Sri Lanka for months, threatening the existing order, did not emerge out of thin air. They may have been sparked by an immediate economic crisis but they are a part of a struggle against dispossession going back to the 1950s.
Published On: May 19, 2022 Updated On: May 20, 2022