"There are more women at the borders now calmly and confidently fighting the state’s war of attrition." | Karwan-e-Mohabbat
Tiffin

Women Bring a Spring of Hope to the Farm Movement

Women have been reinforcing the farmers’ protests on Delhi’s borders, right from the beginning. Their experiences of the agrarian crisis are broadening the demands of the movement beyond defending minimum support prices for crops.

On International Women’s Day, a sea of bright yellow dupattas swept up on the borders of Delhi. It had been almost 100 days since protesting farmers had camped at the borders of Delhi, after their convoys were prevented from marching further to protest against the three farm laws passed in September.

At the Bibi Gulab Kaur pandal at the Tikri border on 8 March, over 50,000 women workers and farmers gathered under the banner of the BKU Ekta Ugrahan farmers’ union.

The song colour my chuniya basanti reverberated in the air. A riff on Ram Prasad Bismil’s mera rang de basanti chola (“Colour my cloak basanti”) — the song associated with Bhagat Singh, Rajguru and Sukhdev’s walk to the gallows — the new song was about women in the farm struggle, breaking out of their ghunghats and the four walls of the home.

The farmers fear that the farm laws pave the way for corporate farming. As farming becomes unsustainable, they will be forced to sell off their land and be reduced to casual labour on their own farms.

The women at Tikri challenged the policy of facilitating market subjugation of farming communities and their forced migration to cities for work. “Where is employment for us, for our daughters?” they asked.

Referring to the underpayment by multinational firms involved in processing farm produce in Punjab, they said: “We are not even given the statutory minimum wage in the farms by the companies, what chance do we stand in the corporatised agriculture?”

On the stage at Tikri, women leaders and activists spoke about the exemplary role of women in farm struggles past and present. They talked about the forgotten role of women in movements of the 1950s and 1960s: Tebhaga, Telangana, the Anti Betterment Levy struggles. Women had fought alongside men for the rights of the tillers, but after the movements were over they were asked to go back home to cook chapattis.

“Those same men who were comrades in the struggles when they became husbands, did not hesitate to even beat their comrade wives,” a speaker said. “But we will not let it happen again.” 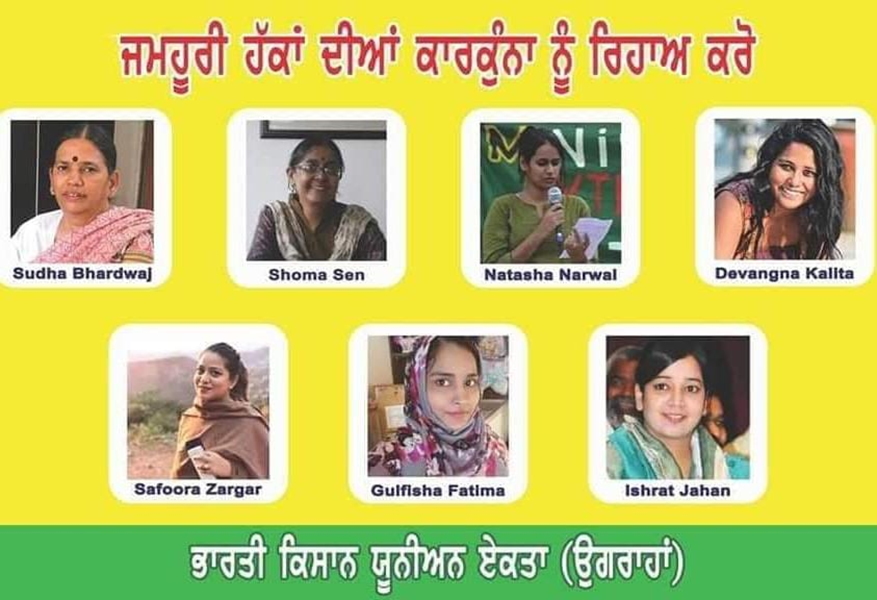 The failure of the leadership of earlier movements to understand the participation of women and to transform the gender social relations was clearly on women’s watch. They threw a challenge at the present leadership, to recognise that this struggle will only be half as strong, half as vibrant if women had not joined the movement.

In December, activists imprisoned in Taloja jail in Maharastra had observed a day-long hunger strike in solidarity with the farmers. On Women’s Day, the pandal at Tikri had images of women activists incarcerated in Indian prisons, including Sudha Bhardwaj and Natasha Narwal. Against this backdrop, the rally resoundingly passed two resolutions. The first demanded the unconditional release of all women activists incarcerated under preventive detention laws. In the second resolution, the rally acknowledged and thanked the brave women journalists exposing the scandals of the state.

The women challenged the handed-down wisdom that good women never speak about what goes on inside the family. A speaker at Tikri drew a parallel with the state. When Disha Ravi and Nikita Jacob joined the international solidarity campaign in support of the farmers, the state charged them with sedition for talking about the internal affairs to the world outside.

Little townships have come up at the protest sites. The women who had marched to Delhi and braved the police barricades, water cannons and tear gas attacks set up kitchens as well as stages. Every day they gathered to hear the farm leaders and cultural activists and to learn about the happenings in the country. The settlements turned into schools where the women learnt about their own oppression but also about others whose rights were being taken away. The new labour codes and the struggle of Dalit labour rights activists Nodeep Kaur and Shiv Kumar were widely discussed themes.

The leadership of the farm movement is predominantly elderly male. Some of the farm unions have a women’s wing, but by and large women are not in leadership positions. But women hold up the back: collecting food and funds, talking to the press, and mobilising support for the movement in the families. Their activities are indispensable to the movement. In the buildup to the march to Delhi, women went around in the village late into the night, mobilising people through jagos and other folk songs.

Women’s participation has given the movement a whole new dimension. They have brought with them their varied experiences of being landless labourers; of having lost husbands, fathers or sons to deaths by suicides; of having to pick up the responsibilities of farming, repaying debts, and demanding compensation.

In late January, women farmers and labourers from the families where men had died by suicides joined the protesting farmers at the border. They carried with them the pictures of their departed relatives. Some held up two.

With women joining, the farm movement’s claims on the state have expanded. The movement is no longer only about state protection through minimum support prices. The experiences of women have added to the farm movement demands for land to the landless, guaranteed minimum wages for farm jobs, and equal wage for farm operations. The past work and activism of some women as members of the Kisan Mazdoor Khudkushi Peedit Parivar Committee (Committee of Farmers and Labour Suicide Victim Families) validates these experience and legitimates the demands.

The farm movement is now nearly five months old. Eleven rounds of talks with the government, last in January, have led nowhere. Since then, the government’s tactic has been to ignore the movement. The farmers are outraged at the attempt to discredit, wear out and increase the cost of protests.

As the wheat harvesting season begins and men return to the farm, women have taken over the protest sites. There are more women at the borders now calmly and confidently fighting the state’s war of attrition.

They laughed at Delhi’s mosquitos who attacked them but were successfully smoked out: “they stand no chance now”.

Pointing to her union button, a woman said: “When you are together and organised, the fear disappears.”

Symbols of the State

After usurping prominent symbols of the Hindu religion, the Sangh is now targeting salient elements of India’s civic religion, and moving more centripetally to the Sarnath lions and the 'dhamma' chakra.
Published On: August 10, 2022 Updated On: August 12, 2022

Coal mine workers continue to die, either in accidents in mines or because of the impact on their health of poor working conditions. A description in 8 photos from one coal field in Jharkhand
Published On: August 10, 2022 Updated On: August 12, 2022

The Silence and Symbolism of Hate

Hate crime laws can be effective only if the legal system engages with how strategic silences and symbolic language often render hate speech elusive, slippery, and impenetrable to legal consequences.
Published On: August 04, 2022 Updated On: August 05, 2022