A curated set of 25 articles published in "The India Forum" during the past year that described, discussed and critiqued the many important events that took place in India in 2019, a momentous year when a project to reshape the country was begun.

There have been many landmark years in the history of independent India. 1962, the year of the India-China war was one. 1969, when both the Congress Party and government management of the economy were radically altered was another. 1975-77 the years of the Emergency and then its rejection were just as important. 1990-1992 were the milestone years of the Rath Yatra that ended in the demolition of the Babri Masjid, of the anti-Mandal agitation, and of economic liberalisation.

2019 was another watershed year, in some ways perhaps more momentous than other landmark years. It was the year when a fundamental reshaping of the Republic was begun; a reshaping of the nation as imagined during the freedom struggle and given formal shape to in the Constitution. It is a project of transformation that has not been completed; it may yet be halted as demonstrated by the wave of nationwide protests at the end of the year. But there is no doubt that it was initiated in 2019; historians will look back at 2019 and assess if this was when the state and ruling elites began to rewrite India.

The India Forum is fortunate to have published many insightful articles on the events, plans, and decisions of 2019.

Here we present a curated selection of these articles. They have been organised around what we feel have been the most important issues of the year.

This is not a “Best of…” selection. The purpose is different: a focus on all the landmark events as discussed on the pages of The India Forum. There are some gaps though: most notably the Ayodhya judgement which has not yet seen a comment in The India Forum.

There have been many other fine articles published in the past year that were not comments on the events of 2019. The listing of all issues published in 2019 at the end of this selection will help the reader explore the richness of the analysis put out by The India Forum since it began publication as recently as March 2019.

(Hyperlinks in text of article below)

2. A National Register of Citizens for India — Pamela Philipose

3. The Crisis of Citizenship in Assam — Sanjay Barbora

4. Statements against CAA/NRC and Police Brutality — Student and Citizen Groups

5. The Republic and the Kashmir Valley — Neera Chandhoke

6. Article 370, Federalism and the Basic Structure of the Constitution — Faizan Mustafa

7. Understanding the History of Kashmir, Art. 370, and Speculating on the Future — Srinath Raghavan

12. What Should We Do About the Indian Economy? — Ashok Kotwal, Pronab Sen

13. What is Happening to Rural Welfare, Poverty, and Inequality in India?— S. Subramanian

VII. The Constitution of India

24. Understanding the Life and Philosophy of Gandhi — Nishikant Kolge

It was at the end of the year that India saw potentially the biggest attempt at transforming the face of the Republic: the enactment of the Citizenship (Amendment) Act. This was closely linked to the proposed all-India National Register of Citizens (though the Government of India denied any such link).

In November, before the Citizenship (Amendment) Bill was introduced in Parliament, Niraja Gopal Jayal wrote about the dangerous path India was choosing and the link between the CAB and the NRC. In an accompanying piece, Pamela Philipose set out how an all-India NRC fitted into the making of a Hindu Rashtra.

It was the Supreme Court-directed NRC of Assam that had first raised concerns about where the country was heading. Sanjay Barbora wrote about identity and citizenship in Assam before the NRC had come to a close in the state.

The legislation on the Citizenship (Amendment) Act passed easily in Parliament, but soon thereafter students from around the country were out demonstrating against the new law and the planned NRC. A series of statements against the CAA/NRC and police brutality were issued by student and citizen groups.

The first attempt at rearranging the face of India was not the enactment of the CAA but the dilution (effectively the abrogation) of Article 370 in Jammu and Kashmir on August 5 and the chain of events that were associated with the decision. At the end of the year Kashmir remained under a lock-down.

A month before Parliament took the decision on Kashmir, the constitutional expert Faizan Mustafa in an article that was the most widely read piece of the year, explained Article 370 in detail and alongside cleared many misconceptions about Article 370 and the promises made therein by India to Kashmir. In a video of a public talk that was reproduced in The India Forum, the historian Srinath Raghavan gave an expansive history of the state, again clearing many misconceptions that had been put to political abuse.

Analysing the decision that the Government had taken, Neera Chandhoke described what she saw as India betraying the principles of respect for diversity and autonomy, and carrying out an internal colonisation of Kashmir.

The major changes that the Government of India effected in 2019 were built on the massive victory of the Narendra Modi-led Bharatiya Janata Party (BJP) in the Lok Sabha elections of April-May 2019.

The sociologist Partha Chatterjee offered an incisive understanding of the election outcome while the journalist Kesava Menon offered an explanation of why voters may have voted the way they did. In a field report that was written during the campaign but was published after the poll results, Shashank Chaturvedi and his co-authors described the allure of the BJP as seen from Eastern Uttar Pradesh.

2019 was the year when the state of the economy steadily deteriorated, when the Government of India first denied there was a problem, and then when it did had few ideas for a revival.

On the eve of the elections, Maitreesh Ghatak and Udayan Mukherjee presented a comprehensive analysis of the promises, failures and modest achievements of Modinomics during the first term of the Narendra Modi government. Later, while the Government, Ashok Kotwal and Pronab Sen laid out a medium-term strategy for revival which would be based on a growth impetus to rural India.

In separate articles, S. Subramanian presented in an analysis of the National Statistical Office report on consumption expenditure in 2017-18 (a report the Government refused to release) the deterioration in living standards in rural India. In two other articles, Himanshu examined the state of agriculture and R. Nagaraj discussed the failure of the much-touted “Make in India” initiative.

The Government initially refused to acknowledge that there was a problem of high unemployment, in spite of all evidence to the contrary. It was a subject that needed separate and independent analysis.

Amit Basole and Arjun Jayadev wrote about the state of employment in India and offered solutions to tackle unemployment/underemployment. Later, in a lucid piece that analysed another NSS report that the Government first refused to publish but later did, Radhicka Kapoor laid bare the crisis in work in India.

Much of electoral analysis suggested that the victory of the BJP in the Parliamentary elections of 2019 was built on its success in two particular programmes: building toilets and providing cooking gas to the poor. Two articles in The India Forum showed that the picture was more complex than official publicity would acknowledge.

Aashish Gupta and his co-authors drew on their extensive field surveys to critically examine the nature of the achievements in ending open defecation and the sometimes unhealthy ways in which the Swachh Bharat Mission was implemented. Ann Josey and her co-authors noted the achievements of the Ujjwala Yojana but discussed in detail the many steps that still needed to be taken for lasting progress.

7. The Constitution of India

During a year when the importance of the Constitution of India had to be highlighted as never before, two articles dealt with different aspects. 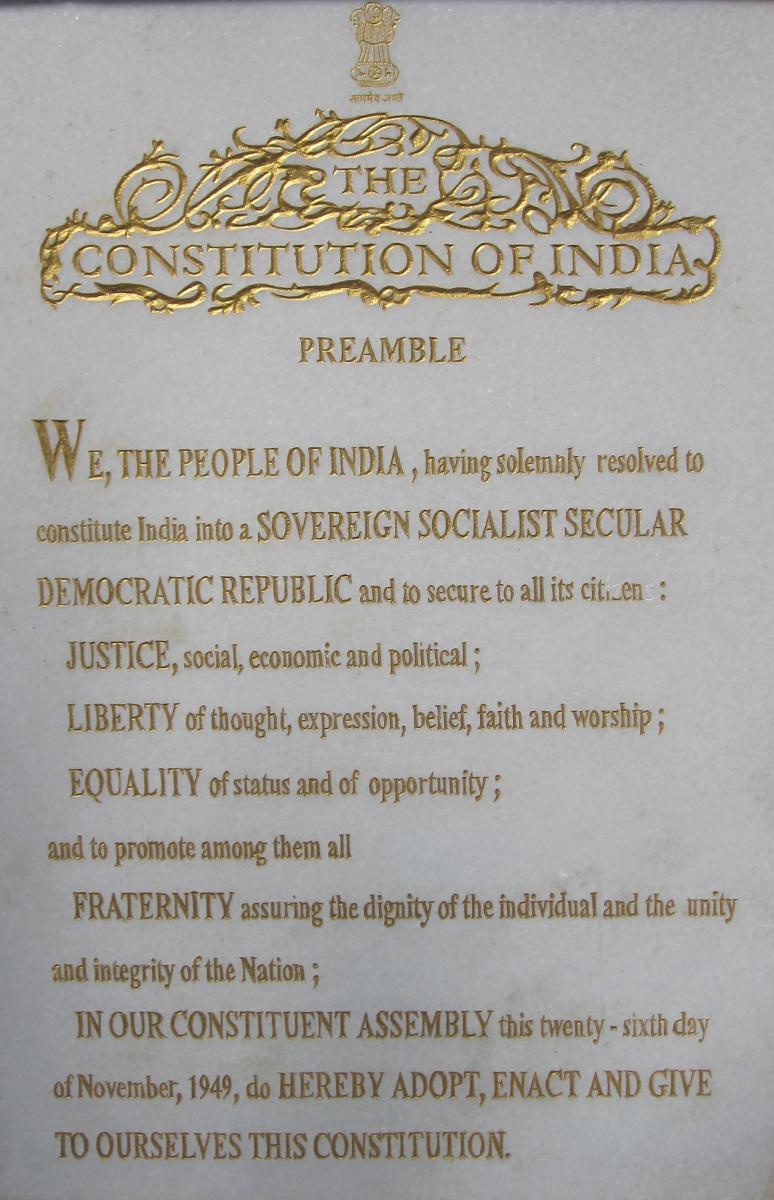 Vikram Raghavan and Lovish Garg discussed the “enduring” Constitution in their review article built around two important books. Amidst the immense strains to which citizenship was being subjected, Harsh Mander made an evocative plea for remembering the idea of fraternity as envisioned in the Constitution.

The media continued to be delegitimised in 2019 and on its part it refused to do its job. In an important article, Sevanti Ninan discussed the process of delegitimisation and what she calls the “Whatsapp-isation” of news in the Indian media during 2014-19

It was the 150th birth anniversary of Mohandas Karamchand Gandhi; a year when much lip-service was paid by officialdom, when a self-professed admirer of Nathuram Godse was elected to Parliament and when the same MP defended Godse in Parliament.

In The India Forum, the historian Vinay Lal offered a very unusual and insightful perspective on Gandhi as a “player of infinite games”. The Gandhi and Ambedkar scholar Nishikant Kolge discussed aspects of his life and philosophy.

As the ideals of pluralism and respect for diversity are increasingly under threat, Manu Pillai reiterated their critical importance for India as a nation in what was so aptly titled “An Essay for our Times”. The choice before us is clear.

These were the articles on India 2019. The India Forum offered so much else as well. From the #MeToo movement to the climate crisis, from continuing casteism to the defanging of the Right to Information, from the discipline of History to an assessment of Randomised Control Trials, there was immense ground covered in this new publication. Everything can be found in these 9 issues:

This article was last updated on December 27, 2019

Symbols of the State

After usurping prominent symbols of the Hindu religion, the Sangh is now targeting salient elements of India’s civic religion, and moving more centripetally to the Sarnath lions and the 'dhamma' chakra.
Published On: August 10, 2022 Updated On: August 12, 2022

Coal mine workers continue to die, either in accidents in mines or because of the impact on their health of poor working conditions. A description in 8 photos from one coal field in Jharkhand
Published On: August 10, 2022 Updated On: August 12, 2022

The Silence and Symbolism of Hate

Hate crime laws can be effective only if the legal system engages with how strategic silences and symbolic language often render hate speech elusive, slippery, and impenetrable to legal consequences.
Published On: August 04, 2022 Updated On: August 05, 2022